What is a Coaxial Cable?

Coaxial cable is a shielded type of cable that has an inner conductor surrounded by concentric insulating layers that are surrounded by a conductive shielding. The cabling consists of copper-clad steel wire that transmits electrical signal flow that can carry video, audio, and other forms of data. The insulative layer materials consist of varying types of polymers and metal braids, or aluminum-polymer composites, which are engineered to block signal interference. The cable is wrapped in an insulating outer jacket, depending on the application, of either UV stable polyethylene (PE) or flame-retardant polyvinyl chloride (PVC). Both the PE or PVC jackets protect the core during installation and for the installed life of the cable.

RF and RG coaxial cable types are each designations from the early days of cable TV and radio transmissions. RF stands for Radio Frequency, and was conceived at the advent of cable television, when it was designed to carry analog signals in most home video installations. RG designations stem from the long-obsolete military specs for "Radio Guide." The numbers assigned to them are arbitrary, non-sequenced, and do not conform to the original RG specifications. Today’s numbers, nonetheless, are specific for application requirements. 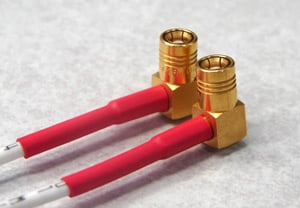 RF coaxial cables are utilized to conduct radio frequency signals. In particular, for applications that produces radio frequencies in the multi-megahertz range. They are considered the standard input cable for TVs and are recognized by the familiar single pin that plugs into the RF input on a device.

RG-6 coaxial cables use larger conductors which are designed to provide better signal quality and handle GHz level signals more effectively. They are made of a heavier gauge wire with insulation and shielding tuned for high-bandwidth, high-frequency applications like internet connections, Cable TV, and Satellite TV signals.

RG-59 cable is thinner, lighter AWG wire. Used originally for cable TV connections, RG-59 has been around for a long time. It is generally found in older commercial office buildings and older homes. It is recommended for low bandwidth and lower frequency signals under about 50 MHz, such as analog video and CCTV installations.

RG-11 cable is the thicker of any other types of coaxial cable. Regarding its flexibility, it can be difficult to work with. However, it does have a much lower attenuation level than RG-6 or RG-59 and is ideal in applications that transmit data for longer distances.

Coaxial cable connectors are applications that connect cables to other devices. The varying types are specifically designed to maintain the shielding on the cables.

BNC stands for Bayonet Neill-Concelman (named for the designers, Paul Neill and Carl Concelman). It is a type of coaxial connector used most particularly with RF cable applications good for up to 4 GHz. The connector uses a “bayonet-like” fixing which prevents accidental disconnection if the cable is moved or pulled. It also provides constant impedance across the whole of the connector.

The threaded version of a BNC connector, the Threaded Neill-Concelman performs better with microwave frequencies than the bayonet connectors. The miniature units are weatherproof and operate up to 12 GHz. They are most commonly used in cellular phone and RF/antenna connections to resolve stability issues.

Subminiature version B (SMB) is a smaller version of SMA connectors. SMBs are one of the more widely used applications for RF/microwave connector variations for industrial and telecommunications equipment. They feature a simple snap-on coupling design for semi-rigid cables with infrequent connections and provide superior electrical performance from DC to 4 GHz.

The 7/16 DIN connector (for the German, Deutsches Institut für Normung) is another RF connector. It is threaded, used in high-wattage transmission applications such as cellular networks, and antenna systems with multiple transmitters. It can be used at up to 7.5 GHz and requires a wrench for tightening.

SMA, or "sub-miniature version A", is a type of coaxial RF connector designed with threaded coupling. While very similar to the popular type F connectors you'll find installed in your house for cable and internet access, SMA are mil-spec and require an adapter to be compatible with household connectors. SMA connectors are widely used in radio or WiFi antennas and microwave systems.

The QMA ("quick mate") connector is a variation of the SMA connector designed for snap-fastening and disconnection. The connector provides excellent performance up to 18 GHz. Since the RF line is identical to the SMA series, the QMA connectors also offer the same high-power handling capability.

What Applications are Coaxial Cables Used In?

Coaxial cables are feed lines used to carry electrical signals (or energy) for video, data, and radio frequency. The familiar cables are ubiquitous and found in both residential and commercial environments. They not only transmit signals from one location to another but also connect a source to a load application. Think: connecting a transmitter to an antenna.

The more common uses and application of coaxial cables are in connecting radio transmitters and receivers to antennas, internet connections and computer network connections like Ethernet, connecting digital audio signals, and for distribution of cable TV signals.