The Benefits of Nearshoring Your Manufacturing Processes 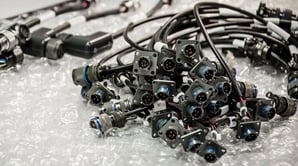 Running a successful business requires constant improvements in processes and efficiency. Keeping up with the latest trends and being able to adapt are qualities that can make the difference between success and failure! Manufacturing costs play a significant role in profitability, and not many are aware of the benefits nearshoring can have for their business. Below we'll explore the differences between nearshoring and offshoring so you can make an informed decision on which might be best for your next project.

Offshoring is becoming a less common practice due to the difficulties in project management, longer lead times, complex transportation logistics and overall costs. There has been a shift to favor nearshoring to improve project cost and management. Similar time zones mean shorter lead times and better response times, while manufacturers in Mexico incur fewer travel expenses and general supply chain costs than their overseas counterparts.

According to a Boston Consulting Group study, Mexico is now considerably less expensive to manufacture in than China, as wages in China have been on the rise while Mexico's remain stable. Because of the low wage growth and a strengthened infrastructure, Mexico has become a major contender as the new global manufacturing base.

Mexico labor costs are less than they were two decades ago, when costs were approximately three times higher than rival China. In spite of the increased transportation costs of producing in Asia, US manufacturers saw the benefit in offshoring across the ocean to exploit these historically low costs. But things have changed since then.

China’s productivity has slowed while unit labor costs increased approximately 5% annually. Since 2007, China’s ULC has grown 60% in US dollar terms. Part of this is due to appreciation of the yuan against the dollar, but rising wages remains the primary factor. Meanwhile in Mexico, it is the rate of productivity that is climbing, while Mexico labor costs are declining. Wages in the Latin American country are now comfortably lower than in China. This has led to a steady loss of market share to Mexico, particularly in labor-intensive manufacturing exports like transport equipment and parts, but also in technology and electronics manufacturing.

JEM Electronics is a leading supplier of custom cable assemblies and wire harnesses, providing OEM and manufacturing solutions for a wide range of industries from military to consumer. Contact us today for more information on how nearshoring your cable assemblies can improve your bottom line.