What is Hipot Testing & What is it Used For?

Hipot testing is necessary to ensure that current flows easily from one point to another. The test verifies the integrity of the cable and its ability to withstand high voltages of a given amount of electricity. In cable assemblies or wire harnesses, testing verifies reliability which could prove life-threatening if there was to be a failure. Good isolation between the parts of a circuit ensures the safety and quality of all electrical circuits.

What is Hipot Testing? 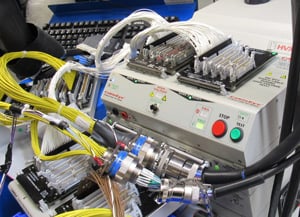 The term ‘Hipot’ is short for ‘high potential,’ that itself is short for the more technical term for Hipot testing, which is a ‘Dielectric Withstand Test.’ Hipot represents a class of electrical safety testing instruments. The reason “good isolation” is widely used to describe Hipot testing is because it does just that—it’s used to verify that finished appliances, transformers, circuit boards, or electric motors have proper electrical insulation, and with regard to wire harnesses and custom cable assemblies, Hipot testing is used to verify the correct operation of safety circuits.

Why Hipot Testing is Important

The importance of the Hipot test is it measures the level of electrical insulation of the particular device or assembly. Testing shows technicians if the insulation can handle any transient over-voltages—the 'push' that causes electromotive charges to move in a wire or other electrical conductor. The electrical insulation is exposed to high voltage over an extended period of time in order to make sure that it, the insulation, meets safety and quality standards.

By exposing the electrical insulation to transient over-voltages, the Hipot test also helps to identify insulation issues. It is important to check for these issues. Insulation is often subjected to unpredictable environments or conditions that can affect the performance of the device. Braided shielding, stray wire strands, tolerance errors, corrosive contaminants, even terminal spacing issues can present problems for electrical insulation to electronic harnesses and cable assemblies. It can be used in finding cuts in the insulation, or nicked or crushed insulation, too.

Hipot testing can also be done on production lines during the manufacturing process. Testing is designed to detect whether the assembly of a production unit is the same as those units that were subjected to type testing. Potential issues inadvertently introduced or applied during manufacturing like creepage or improper clearance distances, a pinhole defect in insulation, and locating an enlarged solder footprint can be identified.

A Hipot test is necessary to test the stress of an electronic device for safety and quality purposes. Under high voltage it checks that there is no breakdown or perforation occurring, and that insulation distances on the line and in the air are respected. Tests can be conducted between mutually insulated sections of a part or energized parts and electrical ground. In either case, during testing, electric current will flow between two points.

Typically, the test works by connecting one end of the supply to the ground and the other end to the conductor undergoing testing. Conductors can either be connected to a high voltage source or the ground.  Just make sure your testing contact is isolated from all other contacts. Hipot testers can measure from 5k volts to 400k volts, depending on the size of the tester.

The duration of the test should directly relate to safety standards issued for the device. Normally, it should be one minute for products covered by IEC 60950, the international standard for rated voltage. Otherwise, the current limit can be set to meet the safety standards of the assembly.