Why the Electronics Industry in Mexico is Booming

It wasn’t too long ago that the electronics industry in Mexico appeared rather bleak, despite the opportunities for U.S. companies to take advantage of nearshore manufacturing there. That was due, in large part, as a result of China joining the World Trade Organization (WTO) in 2001. The far lower labor costs in China easily offset the other costs associated with offshoring there, and drove the American electronic import market away from Mexico. However, as wages began to increase in China and other Asian countries, so did the associated costs of doing business there. The consequence has seen a resurgence in nearshoring in Mexico, not only in the Electronics Manufacturing Services (EMS), but across several industrial sectors that benefit from EMS.

When compared with offshoring, the benefits of nearshoring - moving manufacturing operations to a bordering country - are obvious. It is a sound strategy of partnering with a nearby country to reap the benefits of outsourcing while also keeping business near home due to the proximity of its nearshore partner.

The Current State of Nearshoring in Mexico

With the resurgence of nearshoring in Mexico, the electronics manufacturing industry there today is on a sure-footing. It is characterized by a diversity of products clustered over widespread geographical areas and has emerged as a major industry in the country. For example, Guadalajara has over 380 specialized component suppliers, 14 EMS manufacturing companies and 12 Original Equipment Manufacturers (OEMs). The annual output in finished goods roughly equals $150 billion in exports. The electronics sector alone there employs over 50,000 Mexican workers.

A primary production center for electronic components used in the aerospace, automotive and telecommunications industries is clustered in the Northwestern part of Mexico, while the components used in computers, appliances and related consumer durable goods are located in the Northeast section of the country. Around Guadalajara, Mexico’s Midwest, the manufacturing is primarily centered on hi-tech components, electronic sub-assemblies, telecom, and IT related products.

Who Wins in Mexico vs. China for Electronics Manufacturing?

There are several factors to consider when comparing Mexico and China for electronics manufacturing:

Nearshoring in Mexico works because their labor costs are now lower than in China. Wages in Mexico reflect lower consumer price indexes across the board - in housing, food, transportation, and utilities. Today, hourly wages in Mexico are approximately 40% lower on average than those paid to Chinese workers.  Just a decade ago, Mexican labor costs were 183% more than China. Labor costs are certainly a driving factor in Mexico’s nearshoring resurgence, but there are other factors, too. 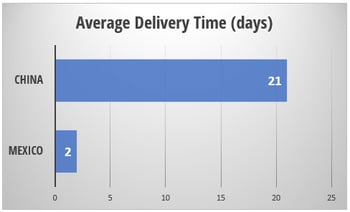 For U.S. companies, the geographic proximity of Mexico has its own benefits. The fact is that nearshoring is easier to manage because it’s closer, less expensive, and these days much friendlier. The distance between U.S. offices and plants, and Mexican facilities is a fraction of a distance than that of China. With time zones being no more than three hours apart and in most instances only one zone ahead or behind, logistics can be easily coordinated daily. The fraction of a distance also means lower transportation costs and quick delivery - two days on average from Mexico compared to twenty-one days from China. Those goods are shipped duty-free to the United States, while competing Chinese products will be near a 25% price disadvantage.

JEM Electronics embraced nearshoring in Mexico in 2001, opening a second manufacturing facility in the Northwest cluster, in Tijuana. This has helped us offer our clients:

If you are looking to take advantage of the benefits of nearshoring for your custom cable assembly and wire harness manufacturing, contact us today!